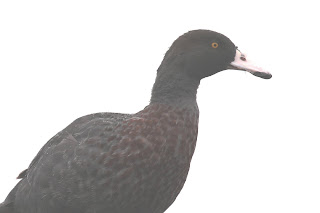 Blue times for blue ducks in Canterbury
6 April 2011
A survey in February this year found an alarmingly low number of blue ducks ( Whio) in Arthur’s Pass National Park. The survey was very comprehensive throughout Arthurs Pass involving helicopters for access and also the use of tracking dogs to find birds that may have been concealed along the river margins during the survey. Over several days three survey teams only found six birds.
With the Arthur’s Pass population of blue ducks being so small the regional population is now under threat. Within Canterbury only the odd individual blue duck is found outside Arthurs Pass and outside of the park there are no other known viable breeding populations in Canterbury. The hope is now, and it is at the eleventh hour, that the population will slowly recover in response to predator trapping that has been taking place along the rivers in Arthurs Pass for blue ducks in since 2004.
Blue ducks used to be common in Canterbury, even being on the Avon River- but like many native birds have retreated in their range to higher altitude and remote locations. There were about 50 blue ducks remaining in Canterbury in the early 1980s but since then the population has continued to decline with a corresponding contraction in the bird’s range. Sadly nowadays these populations are being hit by stoats. Without a doubt now it is known that blue duck populations will not survive in the wild unless predator trapping takes place along river margins.
Blue ducks only nationally number about 3000 and the species is considered nationally vulnerable by DOC. The department’s Waimakariri Office is always keen to hear of any sightings of blue ducks from trampers especially in the Canterbury Region and any breeding records any sightings of blue ducks with ducklings would be very significant.
Predator trapping to protect blue ducks specifically is a recent development in Arthurs Pass and has been funded by sponsorship from the Coast to Coast and other sources. Yet the trapping is relatively recent and may need refining as it has been shown in many other areas in New Zealand such as Fiordland and on the West Coast that blue duck’s breeding productivity, and survivorship, increases dramatically after stoat trapping takes place. Stoats are recognised as being the number one predator of eggs, chicks and even on occasions adults. That there are a few isolated blue ducks in other parts of Canterbury may be due to the fact that blue ducks are relatively long-lived ducks with records of birds living over 13 years of age.
For many whom venture into the outdoors the blue duck is a symbol of our remoter wilderness waterways. I hope that we can keep this iconic bird in the wild Canterbury. Our wilderness rivers will see very empty without them !
Posted by Peter Langlands at 1:32 PM